At the World Travel Market in London a panel discussion on accessible tourism included panellists from around the world, among them Paralympian Ade Adepitan. The participants expressed their frustration at the slow pace of change in levelling accessibility in the playing field for travellers with disabilities, starting with those with physical limitations or consigned to a wheelchair. What was striking, however, was the way in which this segment of the market was seen as still requiring exceptional treatment by operators of holiday or tourism businesses catering for the ‘general’ (read, non-disabled) public. In contrast, experienced operators of solutions in the senior space deal with guests with special requirements, whatever they may be, in a consistently personalised way.

A focus on the senior market equips a business to deal with the individuality that the demographic requires: clients with specific medical requirements, habits and preferences acquired over a lifetime, dietary special needs, a greater likelihood of allergies and skin ailments, medicines management needs, and accessibility needs, among others. Just as making available professionals, to ensure that seniors are not taking medicines which may be in conflict with one another, is a basic medical service for visitors or residents, so too providing appropriate infrastructure and facilities for disabled or wheelchair users forms part of a sensible solution to broaden inclusion. 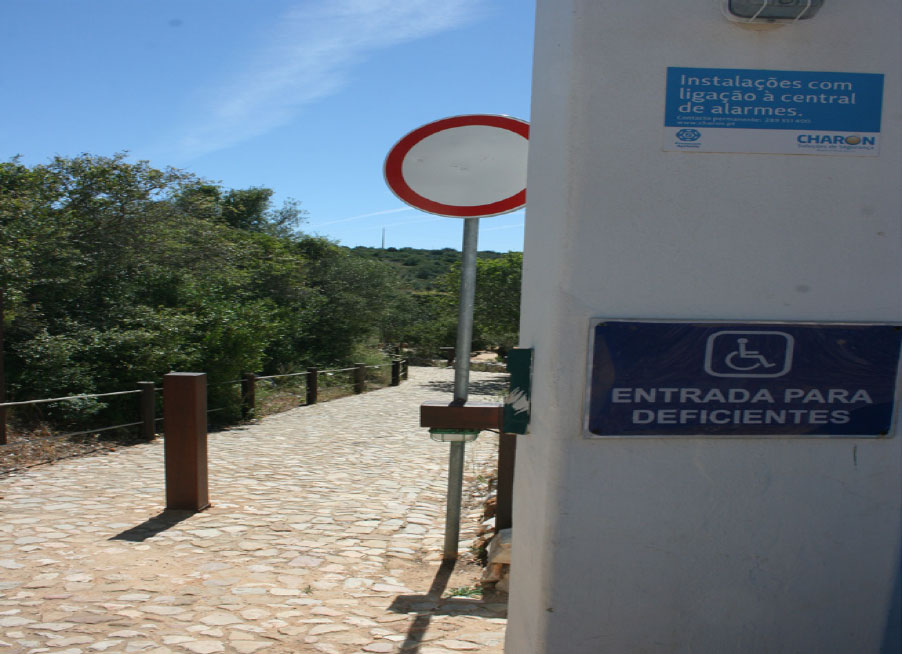 The interesting thing, as the owner of a completely adapted site in Brazil pointed out, is that accessible facilities have broadened the appeal of his site and much more revenue has been generated by the families and friends of disabled guests, than by any wheelchair user.

When Algarve Senior Living added a third location to its business model via a partnership with a beautiful river-side site near Portimão in the Algarve, the response and interest from the market was high. For a business focussed on the 50+ market, simple single-floor or accessible multi-floor accommodation is the logical choice. As the general market begins to understand the benefits of accessible accommodation to the general public, it will be interesting to observe whether owners and developers opt for a retrofit of existing (unsuitable, typically double-storey) accommodation or the development of fit-for purpose accommodation.

The site’s accessibility credentials include 60 rooms prepared for disabled or wheelchair access, with elevators and ramps (including to indoor and outdoor pools, terraces and all public areas), wide doors, fully prepared bathrooms and showers with rails and support bars, sensor activated sliding doors and lighting, and accessibility equipment rental. The immediate challenge was to create a network of services which covered the ground between the location and the guests’ point of arrival or departure, and extended beyond into the accessibility supply chain.

While airlines already provide support in the form of wheelchairs and assistance to disabled users, often the support ends as soon as the traveller enters the airport terminal. In the Algarve, the support network is now much broader. A specialist accessible transportation company, Cultur’Friends, makes available adapted VW Caddie Active vehicles with manual ramps and hydraulic suspension. A network of accessibility partners, integrated into the European Network for Accessible Tourism (ENAT), points travellers with mobility or accessibility to partners or suppliers.
Service-based solutions such as those run by www.algarveseniorliving.com, are revolutionising the way in which travellers with accessibility needs find appropriate solutions. This includes increased focus on ensuring that accessibility information, including any limitations, is more readily available. Accessibility statements, better designed web sites, and in-situ signage, all help to make the experience of guests with disabilities as similar as possible to visitors who are not disabled.

Luis da Silva, Founder and Managing Director of Algarve Senior Living, comments that “we have always had an inclusive vision. While we have been realistic about the current infrastructural constraints, we are constantly striving to seek broad-based solutions. It just makes sense because the quality goes up for all concerned.”

To paraphrase Paralympian Ade Adepitan: “There is an £8.5 billion market out there. Catering for the accessibility segment of the market is not simply a question of ensuring all travellers are treated fairly, but it makes sound business sense. Foolish is the business which ignores the potential of this vast market, avid for travel and for new experiences!”

It’s not quite Miami, or the melting pot that is São Paulo, or Paris with its quartiers, or even London with its myriad Tube stops, many of which represent gateways to miniature international communities. But art in Algarve has its own ‘identity’ influenced by the vast range of nationalities represented in such a small area: Portuguese, German, British, Dutch, American, Canadian, Norwegian, Swedish…the list goes on.

In a regulated world, one where individuality is a treasured human trait and where public expressions of personal taste are increasingly uncommon, art continues to stand out as a medium for expression that crosses the cultural divide. Few places are more symbolic of the Algarve’s thriving multinational community than Arte Algarve, the unique space nurtured into the country’s largest privately-owned gallery by its founder Rolf Osang.

Arte Algarve (art in Algarve) is being developed into a multi-functional space, including a permanent home for art auctions (the first of which planned for July 19th 2014, where more than 170 works will be on sale), and will in the future include a shop for local arts and crafts and an area serving drinks and light snacks. It already houses a permanent Algarve art section, a rotating monthly exhibition and a cross-section of artists in its main gallery.

Artistic multiculturalism is evident in the works that grace the amazing space of the Arte Algarve (art in Algarve) building. 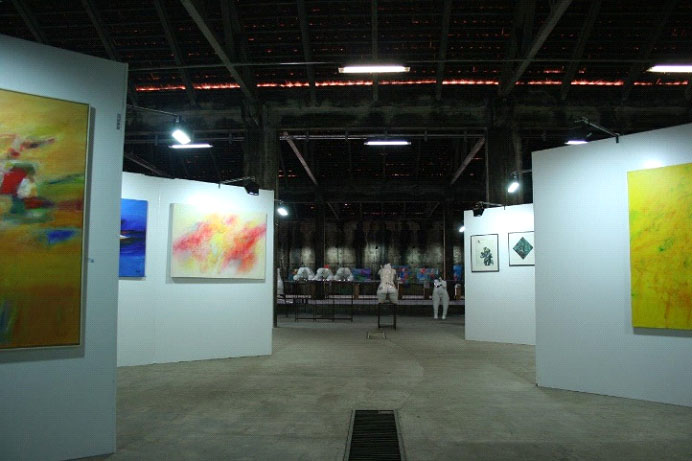 Immediately evident is a blend of an original, almost ethnic, vein, as expatriate artists remain true to their roots, yet create unexpected contrasts with moments of inspiration brought on, one would imagine, by the omnipresent light.
From humble beginnings at a local arts market, Rolf Osang understood that the combination of the region’s beauty, its demographics and the “extraordinary quality of its light”, represented an opportunity to incubate the region’s artistic talent.

Art in Algarve is ‘mature’ art, not only because many of its protagonists are seniors, but because the genre, themes, even the materials chosen are a reflection of a process of experimentation and maturation which sees each artist find the combination that is a perfect match to their taste, style and personality. 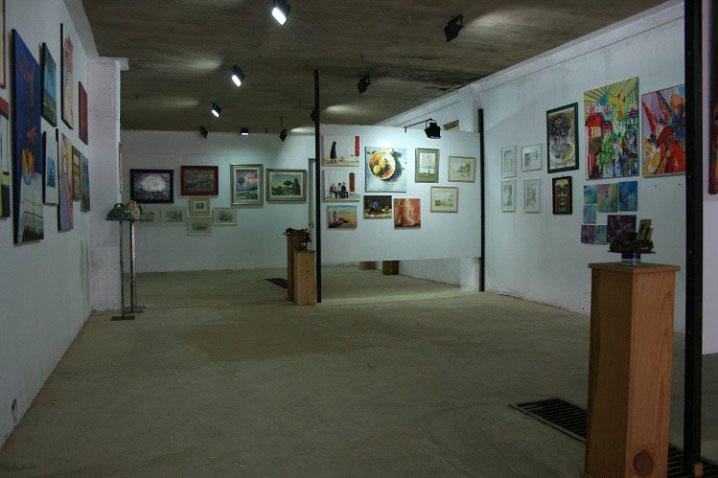 This recurring light motif (sic), present in so many of the works, where artists dare to be bold with colours and strokes, mirrors the physical structure itself, where the badly aligned roof tiles let in scintillating shafts of light while keeping the infrequent rain waters at bay. The combination of natural and artificial, direct and indirect lighting, sets the ambience which renders the massive space surprisingly intimate. The space itself is free of preconceptions and lends itself to the art connoisseur or the person with a love for beauty.

The variety of the work on display, which represents 70 artists in the main gallery alone and rotates every four months, means that a visitor can spend as little or as much time with each artist, choosing to simply gloss over those which are less to their liking. The way in which the gallery is organised, reminiscent of a traditional market where works by each artists are ‘clustered’ (without doubt influenced by Rolf Osang’s early experiences in the region), allows art lovers to find common themes, soothes the transitions between artists, and aids comparisons.

I reluctantly exited the main gallery, feeling guilty that I had not dedicated enough time or attention to any of the artists. I carried this feeling with me until I exited the building itself and looked back. There, I observed the unremarkable structure, a seemingly abandoned winery that had seen better days. My eyes could no longer see the drab outside that daily passers-by on the EN125 road observe, but instead the wonderfully reincarnated interior whose soul was an improved version of a former self. How interesting, I mused, that the senior artists whose works were brought to public attention in this once discarded space, had repaid the old dame with a new lease of life.